Modeling PE is not for the faint of heart!

I just got back from the local Medford Model Railroad Show held each year the weekend of Thanksgiving and it gives us an opportunity to be as glutenous with our modeling purchases as we were with our holiday feast the day before.  I love small regional shows, you get the best buys on exotic stuff and you come across fellow travelers hunting for the obscure as well.

My transition to HO is not a new one, I've maneuvered around the edges for most of my modeling life but given recent events around a rather dramatic falling out with an old friend, I took it as an opportunity seize a clean slate and move out of a smaller scale. As it turned out, there's less drama with this bunch then the last and that's what I'm looking for.  Besides, HO for it's size can be the best deal all around and many times you can find cool stuff for pocket change.

My mission at this show was to look for some of the more unique equipment PE used during it's life, which meant boarding the Way Back Machine kit wise.  Because of the era I model...1955 and the railroad, anything that SP used can be utilized because of the symbiotic nature of the two roads, making my shopping a bit easier.  Also, I want to have a few things that operate so I have more to do with my layout than running stuff back and forth. Top on the list were the old Tyco two and three Bay Hoppers with working lower doors.  In this day of "proto-snobbery" they suffer the eye of the rivet counter, but considering the overall look and intent, they are well done and stand up to a lot of use.  I have a small box full of very expensive freight cars with all the bells and whistles, busted by the tiny fingers of un-attended kids at shows.

Here is a photo of the underside of the Tyco Hopper I snatched from Bruce's Website.  The rest are here: Working Gravel Pit

I also picked up a couple of metal 3 bay hoppers with working doors as well.  Not sure of their linage, but the working features are pretty clever.  More on this later.

The big find were three Ulrich G5 Drop Bottom Gondolas G-50 General Service Gons  for $5.00 each!
These are metal kits that have sides that are pre painted.  Very cool design and dead on for SP and PE prototypes.

I was all set to scratch build patterns and cast up a bunch, but these guys are exactly what I was looking for, and rugged to boot.

Cart Before the Horse

Today I took a little time and worked on my first piece of HO rolling stock, the Athearn 40' Single Dome Tank Car #73203 in Southern Pacific markings of course!  For just under $20.00 at my retail outlet, it proved to be an outstanding buy considering the level of detail.  I spend the majority of my railroad time deep in N scale, so to have at the big brother of the Micro-Trains Line 65,000 Tank Car was a real treat, and easy on my failing eyesight. 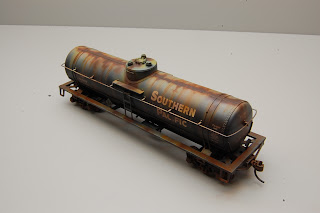 This is an example of the cart in front of the horse in the grand scheme of things, but with such a large pallet crying out for a beat-down, I couldn't resist.  This is a pretty straight forward weathering project that I will illustrate on a few other versions of the same tank car (and sharper pictures) in a near future post.  Basically it's a layered overcoat of thinned down concrete color with additional layers on the top sides and then thinned streaks of Reefer Yellow followed by rust and a dark mix of 50% rust and black over the lighter areas.  I use the multi-media philosophy of weathering...what ever works, works.  Lots of washes and highlights, small brushes and good ventilation.  This car is a bit over the top given my time period and  location, but each component has it's story and this one involves a tank car that spent 20 years on the Western Division of the PE, so Salt and Sun play a big factor in the finish.
Posted by shipsure at 8:43 AM No comments: 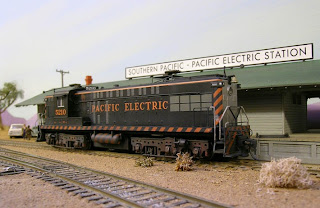 Starting a blog is always a bit awkward...what to say and what you do...is anyone listening?  The purpose of all this is to chronicle the development and building of a smallish Pacific Electric Railway switching layout inspired by Bruce Petty's track plan.  As is the case with these kinds of projects, it's difficult to get a clear vision of what the final product will look like.

There's the adage that the camel is the product of a committee gathered to design a horse and so goes most Model Railroad projects.  We start out with the simple notion that we only want to run our engines about a small, finely detailed layout that would make John Allen and his Z scale progeny David K Smith proud.  What we end up with runs the risk of looking like we threw a pot of spaghetti on a  4'x8' piece of scrap ply "cauze we hate to see wasted space".  I won't approach design at this point, suggestions on the internet being as common and as annoying as fleas. I hold close the notion that keeping it simple rates as one of the paragons of wisdom in the Model Railroading world and the acceptance that it's the most difficult to live by.

I've designed hundreds of layouts on my trusty  Anyrail program Anyrail web and they all started as a simple loop and a few switches and then, just another, and then...oh crap...spaghetti!  With that I rolled over and accept the unwitting help of Bruce and his much clearer vision of what works and what's a wild donkey chase.  His simple Pacific Electric Railway switching layout featured on his website http://lariverrailroads.com/train_layout.html  looks to be a great starting point.

Here is what Bruce came up with and later, once I have the drawing finished, will post the slight design alterations I did to it.  This layout allows for a removable loop at the right end for running engines in a roundy round as space permits.  I want to do this in 5' modules so I can take it to shows and to accommodate my rather gypsy lifestyle these days.