After a long week at work I decided to make one of my regular pilgrimages south to Dunsmuir for some "model railfanning" as Bruce Petty calls it, some good coffee and a few slices of really good pizza with my friend.  Proto trains were almost non existent thru the yard the few hours I was there, but the weather was Spring like and great for re-charging the batteries.

Major score for my fleet thanks to Bruce.  I offered to weather one of his Red Caboose/SPH&TS F70  plaster board flats. Proto and model info   In exchange he gave me an extra unit so I am now the proud owner of one of these unique flat cars.  According to Tony Thompson's bible on SP Flatcars, this version of the F70 was converted for other uses including ballistic sheet aluminum loads, railroad ties and other cool stuff. Give the area I am modeling, I may go with some sort of lumber load for a box making plant.  More model info here: Model images

If visiting Bruce and John Signor is not enough reason to go south, the local hardware store also boasts a small hobby shop and for the most part all the offerings are Southern Pacific themed with a few UP products to keep the local foamers happy.  I have to restrain my buying until I get more of the layout done, I don't want a bunch of stuff that has no business on the Orphan Spur.  The only major acquisition missing so far are the Reefers.  I think, given the short line nature of the route and the Packing Plant heavy theme, I will need to look at some of the PFE resin kits out there for something more specific and interesting to look at. I really want to cut open the doors and have them positionable...not working, but can be shown open or closed.  Ought to be an interesting project.
Posted by shipsure at 9:52 AM No comments:

I want to take a few moments and recognize the resurrection of Bob Smaus' Los Angeles layout here.  I have a few personal mentors out there who have kept me focused and inspired me and then there are those trail blazers who I have never met, but are no less influential or inspirational.  Bob is one of them.  As a wanna be Gardner I used to watch him on the PBS series Victory Garden from time to time, but didn't know his modeling sideline.  Smaus Main Page  Bob did a great job of capturing the flavor of the Los Angeles experience and wrote a good many articles over the year illustrating the how's and why's.  I had dreams of building his home layout in Z someday...that may still happen if I ever get a chance to put down some roots.  I really like the flow of the thing and with the advent of more track components in the scale, it is possible to do a nice rendering of it. Rebuilt Layout

I'm still torn between Bruce Petty's PE Orphan Branch layout plan and developing one that represents the Southern Wing of the PE down to Venice Beach. 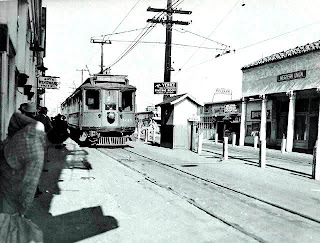 What's not to love about a couple trolley equipped S4's and SW1's pulling a string of tank cars down an avenue like this??

Too many options theses days...damn you Internets! :o)   What ever direction I go in or scale...I think a big chunk of what Bob gave the modeling community and me, will be evident in it.  Now that he has moved up here in the moist part of the Pacific Northwest, hopefully I can drop by someday and see this magnnum opus for myself.
Posted by shipsure at 11:21 AM 1 comment:

Back in the Saddle

It's been awhile since I was able to relax a bit and start posting again.  Due to some changes in my life I had to relocate from the isolation of my mountain top retreat back down to the bustling burb of Talent Oregon.  A sleepy little place sandwiched between the Conservative Gun Toting paint everything red white and blue city of Medford and the only Liberal bastion of political thought and lifestyle this side of Eugene, Ashland.  Talent really struggles with it's identity and owing to it's place geographically, someone middle of the road in thought and action.  The advantage is that I am within a 7 minute walk to work and have some space at my new place to expand and actually start doing some ground work on my layout.  The disadvantage is the lack of a really good coffee shop in town.  I mean the one local shop benifits from no competition, but is getting better.  I hope someday they start employing serious Barrista's and replace the clown posse they have now.  Dressing like a Bohemian doesn't mean you can brew a proper cup of Java.  So, 15 minute drives back to my beloved Ashland for a cup of coffee are minor annoyances, but once there, they are a welcome mini vacation and memories of good coffee and good food.  Back to the subject at hand...

I've mad a few acquisitions over the months, beefing up my motive power roster with the addition of two new Bachmann S-4's.  If there was ever a good deal in this world, these little beauties would be it.  Standard DC versions can be had for under $50.00 at discount on line hobby shops and those with DCC and Sound near $120.  The nice thing about the DCC units is that Bachmann designed a chip that works both with standard analog and DCC without having to switch anything.  It even makes all the correct sounds when on a regular DC track!  This way I can run my trains with my buddy Bruce Petty on his DC only track and then use the same units at my club, which is DCC only.  Very cool.   These units pull about 8 cars comfortably, lashed up I can sort 20.  Gotta love progress. 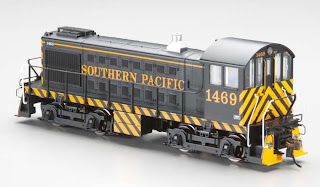 Rolling stock has been added to as well with a few old Athearn 40' PS1 box cars, a hand full of Accurail outside braced boxcars, Athearn and Atlas tank cars and the real standout of my fleet, the Intermountain F70, SP flat car.  As large as the SP fleet was in it's day, there are very few pure SP prototypes in any scale.  Most of their stuff was shop built and didn't see wide spread service on other roads until they were gobbled up by UP.  The F70 is a sweet ride and thanks to the Southern Pacific Historical Society, you can get some nifty add ons to make the Sheet Rock flats and the TOFC flats most wanted by modelers. SP F70 Flatcar upgrades   I will be ordering 5 of the TOFC flats for a future project as soon as my fun kitty fills up again.

Posted by shipsure at 9:15 AM No comments: